Brown rice syrup – also called rice malt syrup or maltose syrup — is a vegan, fructose- and gluten-free liquid sugar substitute. It can often be found in Asian cuisine and many people find it a plant-based sweetener alternative to traditional refined sugar. It is made by cooking whole grain brown rice that’s been treated with enzymes down to turn its starches into sugars, resulting in a sweet light brown syrup.

One tablespoon of rice syrup has 55 to 75 calories, depending on the brand; sugar has 48 calories per tablespoon. While half as sweet as sugar, brown rice syrup has a high glycemic index of 98 (compared to sugar’s 65), and can be used as a sugar substitute in baking and cooking with some minor adjustments to the recipe.

What makes brown rice syrup such an attractive ingredient in the wide range of products it can be used in as a substitute for high-fructose corn syrup – from candy and breakfast cereals to snack bars and ice cream. 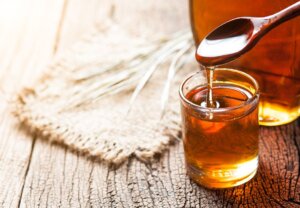 And unlike high-fructose corn syrup, rice syrup adds a slightly nutty flavor to foods and beverages.

Additionally, brown rice syrup can be used just like any other liquid sweetener such as honey, maple syrup, or stevia. Many people enjoy adding it to their coffee or tea or as a dessert topping.

Additional Functions of Brown Rice Syrup as an Additive

Additional functions include improving a product’s:

Learn more about the benefits of brown rice syrup – and the wide range of products Sweetener Products offers. Contact us.